Back to all posts

I love the beach. I can’t help it. Growing up near Pittsburgh, Pennsylvania I experienced the cruel humiliation of having to wear a snowsuit to school during the winter when I was eight. This particular wardrobe choice (which was of course forced upon me most unwillingly) may have been enough to plant seeds inspiring me to move to warm climates as an adult. I suppose if you are in Antarctica, it’s a different matter altogether. It’s not that I dislike cold weather. I love the invigorating feeling that a snowy winter day can bring. It’s just that when I sit by the ocean, I feel inspired. I truly feel the waves have the power to wash away whatever is bothering me, leaving me clean, fresh and renewed.

One Sunday afternoon several years ago, I realized that I wasn’t the only one who experienced moments of renewal at that place where land and sea meet. I had attended church that particular morning and afterwards I suddenly felt called to drive to Santa Monica beach for the afternoon. Such a prompting rarely met with any reluctance from me, as long as my monthly budget for gas hadn’t been drained yet. I quickly changed into my bathing suit and shorts, grabbed my beach bag and set off. After parking and walking to the Pier, I ventured down the wooden staircase in noisy flip-flops and was mentally preparing to scout out a spot to put my blanket. But this Sunday, I was faced with an astonishing sight. There in the sand were hundreds of red and white wooden crosses. Each cross represented a soldier who had died serving in Iraq. My feet abruptly stopped working as I stared at the dramatic, moving spectacle they called Arlington West.

I’m not sure I can completely explain in words what I felt seeing how far the rows of crosses stretched that day. My breath caught, my whole attitude shifted and the pace of my stride slowed way down. In a way I wanted to cry, to scream, to fall down. I knew I couldn’t just saunter on by, in a hurry to plant my pink blanket on the sand, unload my beach bag and preen with my cool black sunglasses. No. That would have to wait. This scene in front of me demanded respect and it demanded that I take at least a few moments to pay homage to those who had passed on. The usually golden white sandy beach had now become a monument, a stage, and a symbol. It was there for all to see, for all to take in. It was impossible to ignore.

Silencing an audible gasp, I forced my eyes to focus directly in front of me, trying not to look for the ends of the rows of crosses. To my right was also a plaque with a quote from Dr. Martin Luther King Jr. As I read the quote, my soul stirred. I knew Arlington West would not remain there in the sand forever. I felt helpless, as if there wasn’t a thing in the world that I could do in that moment except say a prayer of thanks. It didn’t feel like enough. 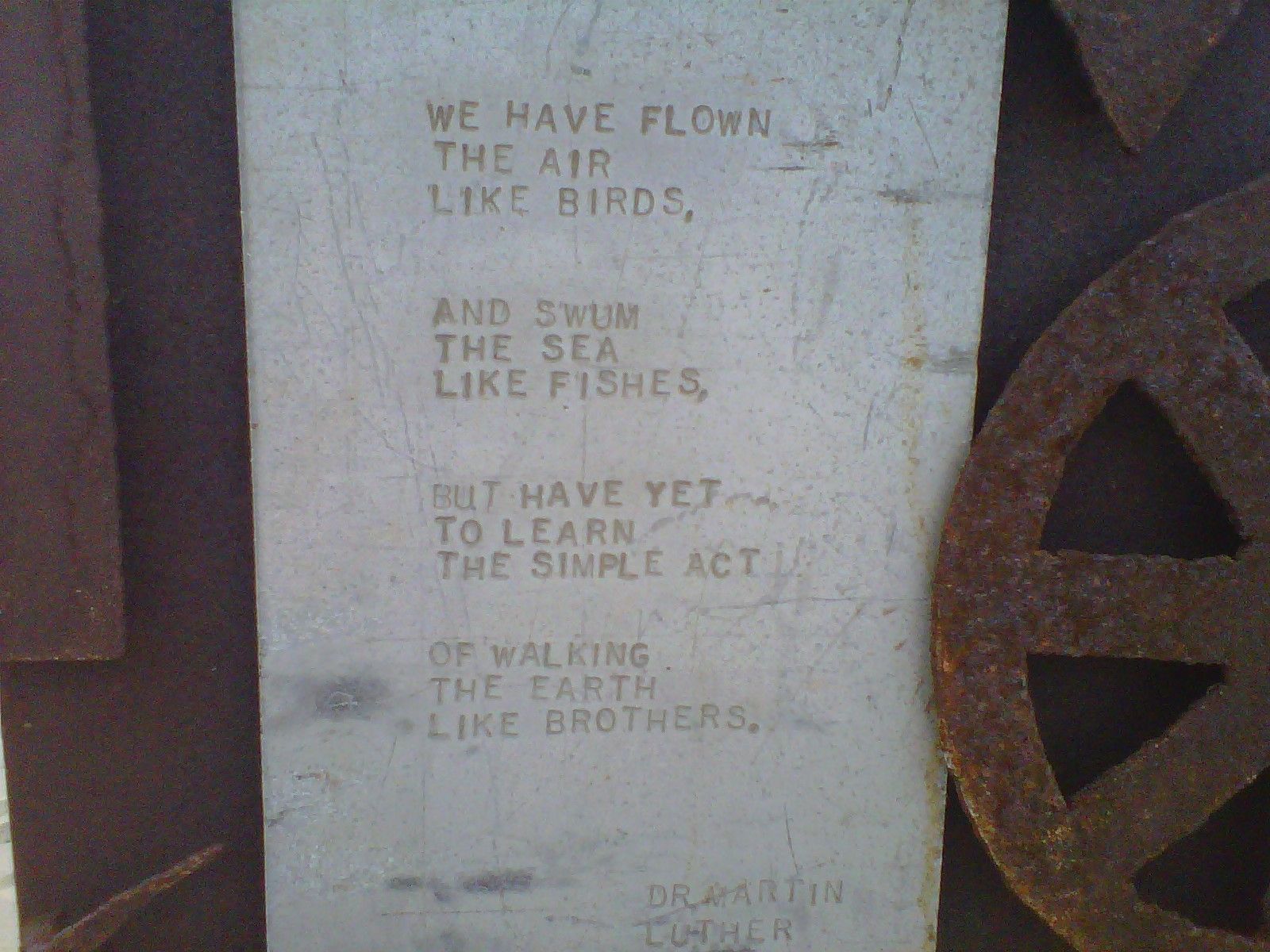 I tried after a few seconds to regain my composure. After viewing what was there to see, I walked over to an open spot on the beach, lost in thought. I knew now why I had felt prompted to come. I knew also that it was not going to be my typical beach day. And that was ok.

Leaving my cover up and shorts on, I arranged my blanket on the sand and laid down. I watched the people walking by, feeling sad and still a little overcome. I also felt grateful to have had the opportunity to experience it. I stared at the water and thought of my friends from Pennsylvania and California who had joined the service. I thought about my high school sweetheart who had been sent to Iraq, something that I could barely comprehend emotionally at the time. I thought of my California neighbor who had served in the National Guard at Ground Zero. My eyes teared up and I felt waves of fear moving through my body. I felt very alone in that moment. Why did such suffering have to take place? What did it all mean?

Suddenly I heard a voice to my right and saw a dark-haired man in his mid-twenties approaching. He was fully clothed, wearing khaki pants, a long-sleeved white shirt and dark glasses. He commented to me that it was a surprisingly cool day, which it was. At first I didn’t want to talk to him. The last thing I needed on this day was some overzealous guy trying to pick me up. After a moment though, something told me that he wasn’t a wacko. He didn’t look like the type to try and pick up girls on the beach. We started chatting about nothing in particular. Eventually, he sat down beside me. 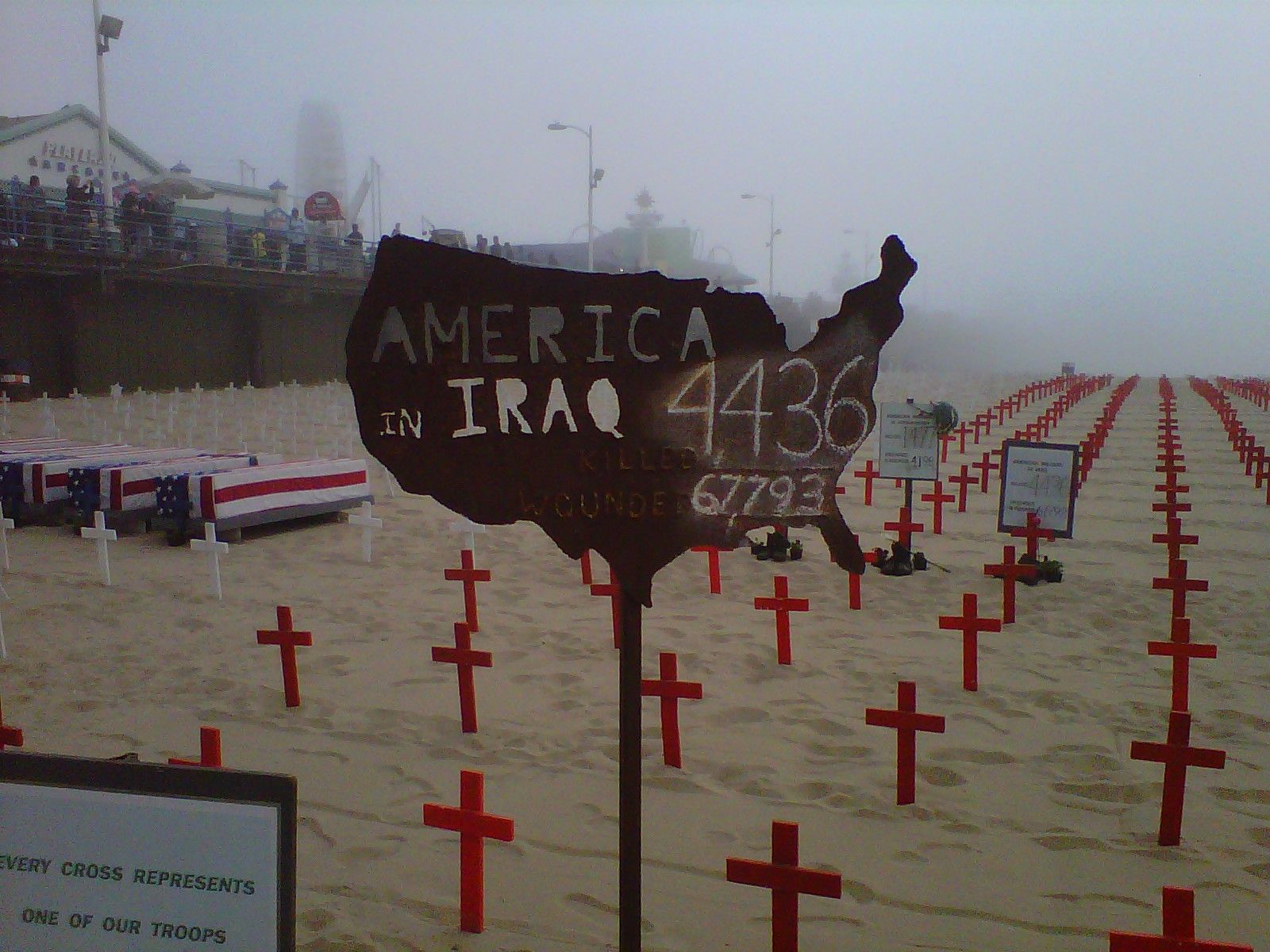 As my guard slowly relaxed, I realized that John was an ex-Marine. He said they had sent him home not long before. Several of his friends had been sent to the Middle East. They never came back. Although he was well-dressed and clean cut, there was something haggard in his posture. It was shame. To my surprise, he began to open up to me and I mostly just listened to him. He seemed to be very upset about the fact that he was no longer a Marine. He seemed embarrassed about what had happened and about the possibility that perhaps he had failed his country, his fellow Marines, himself. He seemed to be without a clear sense of purpose. He asked rhetorically of the Southern California wind, “Why did I come home and my friends didn’t?”

I let him talk for quite awhile, feeling it was unwise to interrupt his process. I could hear the pride in his voice when he talked about entering the service, doing the vigorous training and going on to become one of the few, the proud and the strong. He seemed very upset that two or three of his friends, men he had trained with, would never see any beach ever again. He explained that sometimes they used Santa Monica beach for training exercises, a fact I had been unaware of. He turned to me and said, “I never come here without wearing my sunglasses. I can’t take them off.” I knew the glasses were doing more than shielding his eyes from the sun.

John was obviously full of potential. He was an intelligent man, caring and interested in education, in technology, in people. In response to gentle questions, he easily spoke of his family and of other interests. I could envision him in another career, serving people, doing something else. Right after this hazy but powerful vision popped into my mind, I decided to let loose.

I looked at him and said “It really doesn’t matter in the end what they told you about why you are no longer a Marine. You will always be a Marine in spirit and in heart. But if you were still an active one, you might never come back. You lost several friends. You could have been next. But somehow you were spared. It wasn’t your time. It’s God’s will for you to go on and serve in some other capacity now. He has other work for you to do.” I thought of the times in my own career when projects had fallen through. I had learned that when one fell through, something else would usually come up later. You could tell yourself all kinds of things about the projects that failed. You could spend hours trying to figure out where it went wrong. You could blame others for it. You could blame yourself. In the end though, maybe there was more to it than that. 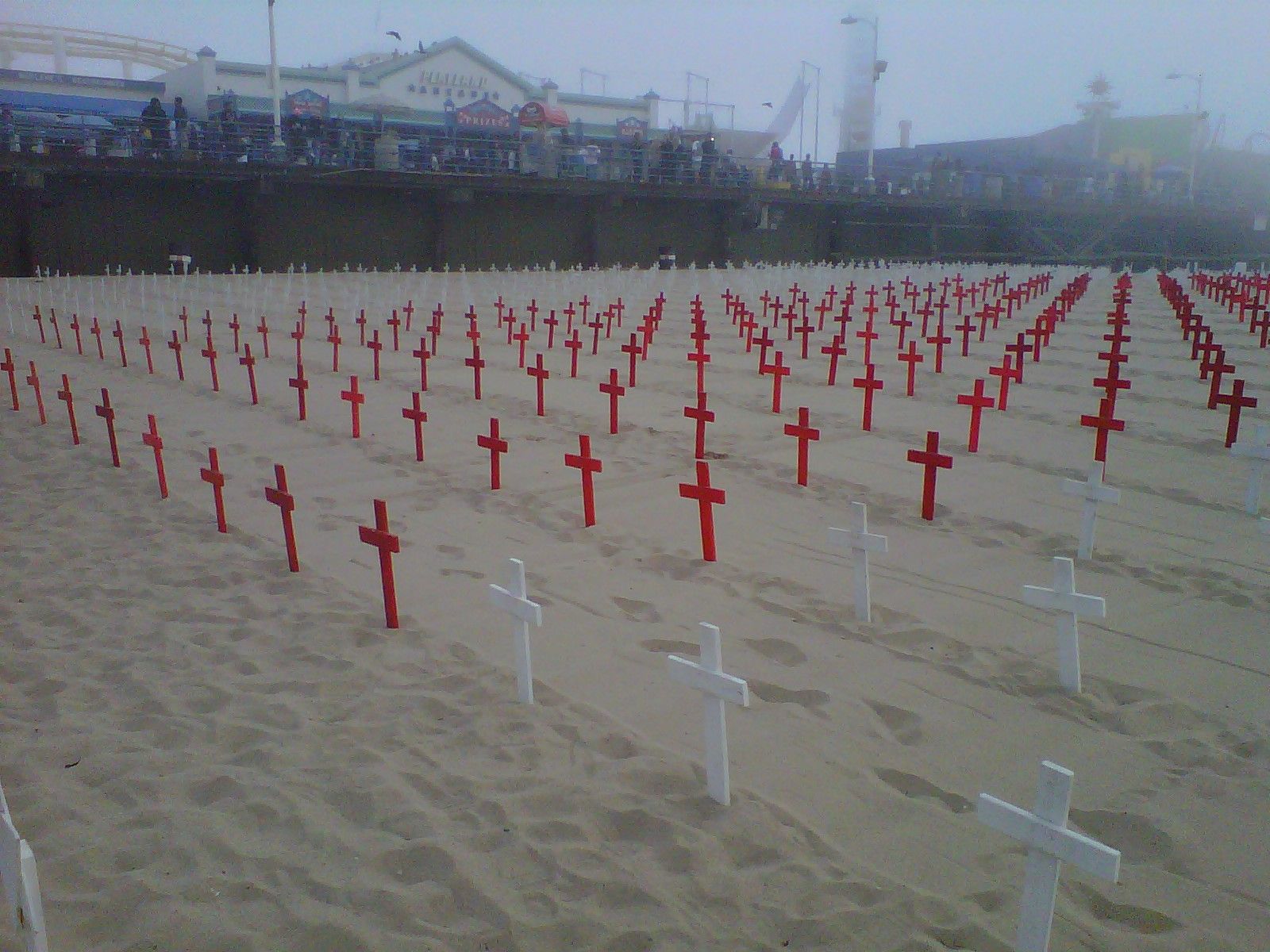 What I was saying to John seemed to be coming from someone else’s mouth. I was aware on some level of the perspective I had just offered, but I was also really hoping that he wouldn’t be upset by what I said. He looked at me with mild astonishment. After a few moments he said “Really? That makes sense.” I talked on a little more, telling him that he didn’t have to attend any particular place on the weekends in order to connect with God. I did share with him that I went to church but I encouraged him simply to pray and seek God’s strength and renewal. I told him, “You have been a soldier, and you have been strong. Now it is time to allow God to renew your strength, to heal you.”

We talked for almost two hours. Eventually I shared some of my own sorrows with him, namely my regret that I hadn’t been there enough for my high school sweetheart when he left for Iraq. I had been caught up with schoolwork and music at that time and had felt overwhelmed when I learned of his plans. Even though I supported his decision, I didn’t possess the skills to support him emotionally the way I was now doing with this stranger. The irony made my heart heavy. John encouraged me not to blame myself. He put an arm on my shoulder and tried to comfort me. I knew he could understand. 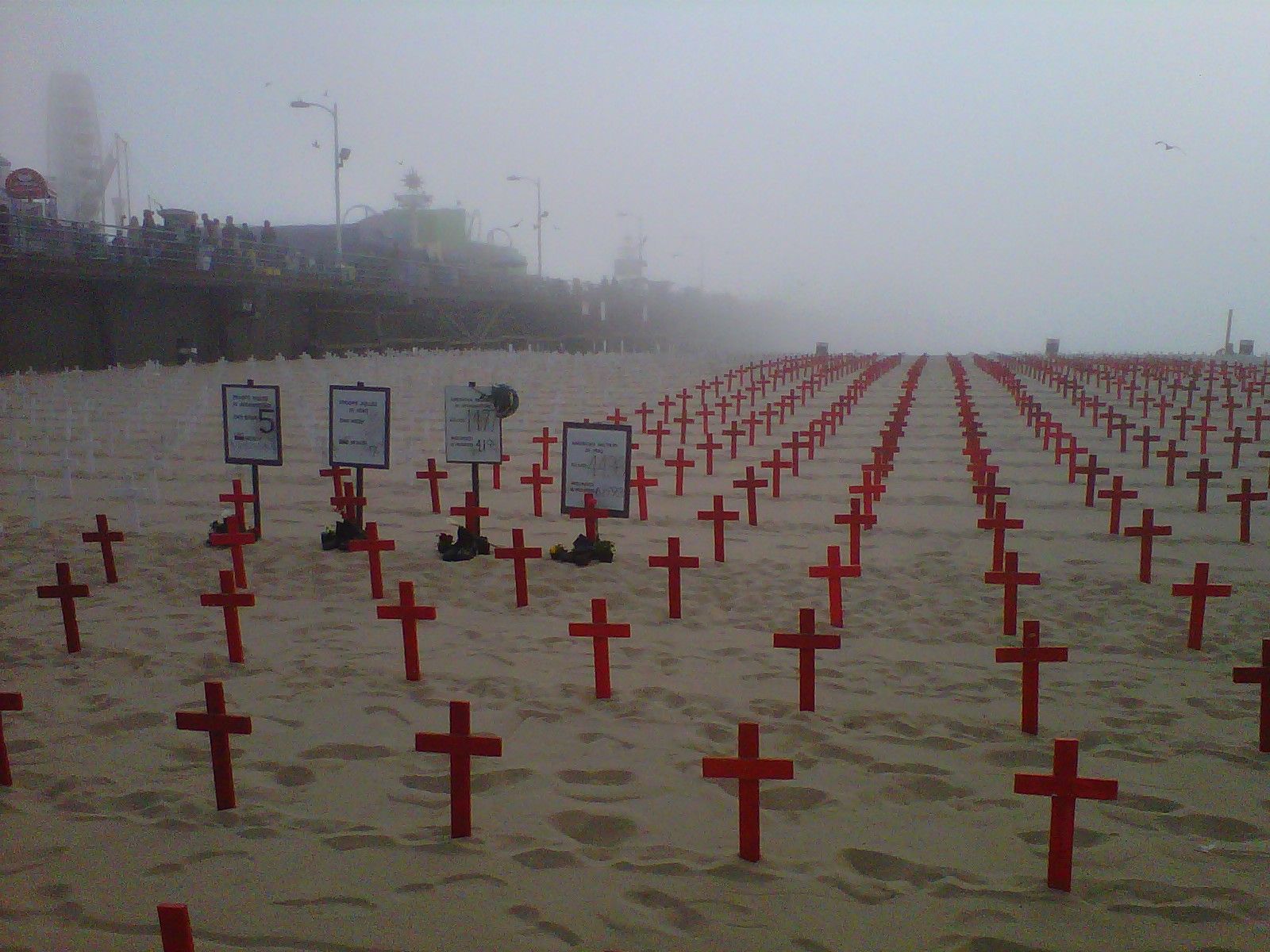 Finally we both began to watch the sun setting. It was getting dark slowly but surely and the beautiful, crystal blue water was beginning to look like a grayish haze in the distance. Suddenly John said, ‘I think it is about time that I took these off.” After nearly two hours of talking, he took off his sunglasses. I grinned, realizing that I had simply been ignoring that, listening and talking around it. He blinked, adjusting to his new bare-eyed gaze. His eyes looked irritated, unaccustomed to even dim light. “That’s the first time in months I’ve taken those off,” he said. He lifted his head up to the sky and glanced at the fading sun. I knew he was moving towards a new future and taking the first small steps of courage to really live.

We shared a coffee together at some overcrowded shop on the Pier. It was loud and suddenly it became difficult to converse without shouting. The mood shifted. Soon he walked me to my van and we said goodbye. I had the vague feeling that I had delivered some kind of message and now perhaps my job was done. I had a feeling that I might not see him again. I also had a feeling however, that our paths had not crossed by accident. 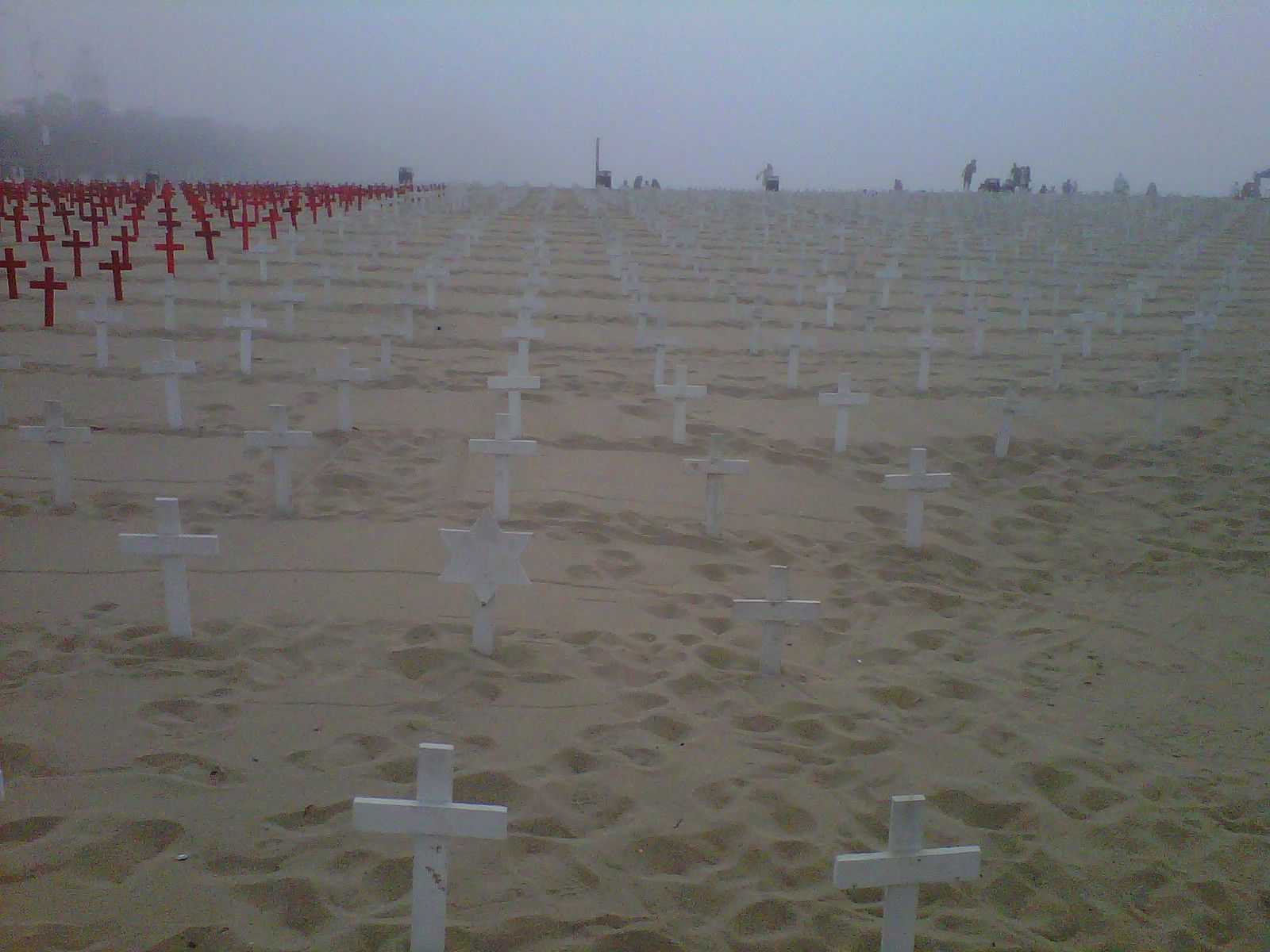 I hope you are out there my friend John. I only spoke to you for one afternoon but I'll never forget you. I hope you are finding the new chapters in your life. Thanks for sharing and for listening. Face the world, life your face to the sun. Be grateful for each day.

I’ll be here too, a warrior in my own way…working hard to do the same.

Katherine Farnham - is a Billboard-charting, internationally acclaimed and eight time Global Music Award winning recording artist, published author and passionate supporter of human and animal rights. She has supported many charities including veteran outreach for well over a decade. Her heartfelt song “My Shoes Are Leaking” is available on her website as a free MP3 and Tribute to Our Troops. http://www.katherinefarnham.com.