“...absolutely brilliant...Farnham is doing for jazz what Clapton did for the blues - bringing it to the mainstream.” 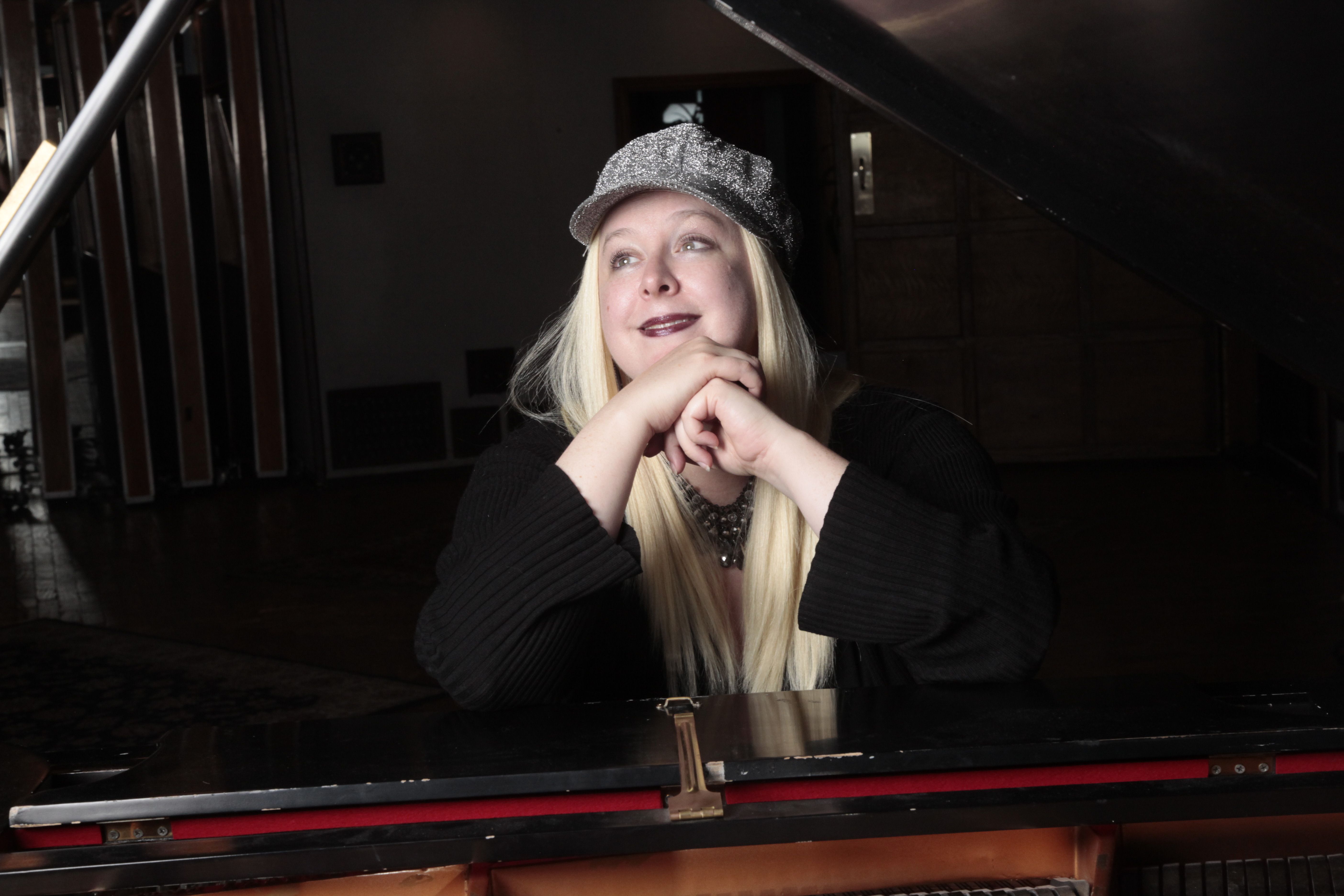 2022 Grammy U Mentor, Billboard-charting, 9-Time Global Music Award winner, and internationally acclaimed singer/songwriter/pianist Katherine Farnham has been called a musical genius by industry veterans, fans and students alike. Hailed as “one of the top artists of our time” by journalist Toninho Spessoto, she was recognized as a prodigy and was composing, playing piano, singing, and acting by the age of five.

The Los Angeles Music Awards voted the third-generation musician the “Best Female Singer/Songwriter” in their entire twenty-five year history. All Music Guide says, “Her lyrics are heavy and meaningful, but her vocalizing is soaring.” AXS says, "...a singer with many sides, all worth getting to know...an open, fearless artist. Two-Time Emmy Nominee and Celebrity Radio Host Phillip Silverstone raved, “absolutely brilliant. Farnham is doing for jazz what Clapton did for the blues – bringing it to the mainstream.”

Even throughout a challenging few years, Katherine has continued to release new music including "LOVE PHILOSOPHY" and her long-awaited Latin jazz project "ALQUIMIA".

In the last few years, Katherine has won over a staggering twelve music awards, including being one of the youngest recipients of the Albert Nelson Lifetime Achievement Award. (Other recipients include Colin Powell, Wonder Woman Entertainer Lynda Carter and actress Dee Wallace.) Katherine’s 2022 CD “LOVE PHILOSOPHY” won a total of eight Global Music Awards - one for the whole album and others for seven singles. She has earned Global Music Awards for "Jazz/ Emerging Artist" and "Jazz/Blues Song" as well as Los Angeles Music Award Nominations for “Best Jazz Artist” and "Americana: Blues & Roots Artist". She won a Las Vegas Counter Culture Award for "Best Jazz Performer". HG Radio in Mexico also nominated her for her Spanish language singing with “Cantante Feminine del Ano".

With “LOVE PHILOSOPHY”, she serenades listeners with beautiful originals and standards in English, Spanish and Portuguese, proving she is an artist with an incredible heritage, an exciting present and a future as bright as the stars. Just as importantly, she is an artist with a message relevant for our times.

Farnham has earned comparisons to Barbra Streisand, Celine Dion, Christina Aguilera, Sarah Vaughan and Diana Krall. She’s not just a brilliant vocalist, but also a classically-trained pianist and entertainer of the highest caliber.

Katherine’s artistic legacy dates back over one hundred and thirty five years to legendary composer and concert pianist Franz Liszt. Farnham’s father was a musician/scholar who toured as first trombonist with The Boston Pops and The Baltimore Symphony and her mother was a concert pianist, composer, and former Director of New England Conservatory’s Wellesley Branch. She personally trained her daughter for over a decade. This tutelage went in a direct pedagogical line from Katherine to her mother, to her mother’s teacher European concert artist Madame Dayas, to Dayas parents and then to Franz Liszt. Going back even further, Liszt studied with Carl Czerny and Czerny studied with Beethoven.

With this kind of legacy, it is no surprise that Farnham eventually made the piano a central focus on “LOVE PHILOSOPHY”. Assembling a multiple Grammy-winning production team, she recorded on not one, but three world-class Steinway grand pianos. Combining originals with well-loved jazz, blues and theater standards like “Besame Mucho (feat Denny Jiosa)”, Billie Holiday’s “Good Morning Heartache”, and “People, A Tribute to Barbra Streisand (feat Mindi Abair)”, Farnham has created a world-class work. This album speaks lyrically of spiritual love with the title track and singles “Dreams (feat Denny Jiosa)” and also true romantic love with “Night of Romance”, a honest, heartfelt ballad complete with string section for which she won a Global Music Award as a songwriter.

Trained by both her musician parents as well as classical and jazz legends, Kat began her performing career as an actor at age five and sang her first jazz vocal solo a few months later. Her "VINTAGE" CD earned rave reviews, interview requests and airplay in US, Canada, Europe, South America and Africa and standing ovation and sold out live performances. She has appeared on Good Morning America, NBC 6, Telemundo and toured throughout the US and abroad. She has performed at festivals including the Hub City Jazz Festival in New Jersey, and at major athletic events such as The Ericsson Open (the only female artist), The Miami Marathon and national dates for NASCAR.

She and her longtime band have recorded and performed at world-class venues throughout the nation.

Katherine is also a published writer and passionate educator and has taught at several universities nationwide.

“I really enjoyed My Shoes Are Leaking! What a cool title, what a lovely voice. I'm honored to be recording with you..."
--Grammy-Winning, Legendary Saxophonist Kirk Whalum

"Wow! Someone who can really sing. Great song too [My Shoes Are Leaking, Veterans Tribute}"  --John M. Grammy-Nominated Engineer, Nashville

"This amazingly talented and diverse artist crosses musical styles from the genres of jazz and adult contemporary to form a sound that makes her competitive in the mainstream commercial marketplace. Her unique voice and vocal arrangements made her a crowd favorite at both of our showcase events." --Los Angeles Music Awards  (Best Jazz Artist Nominee; Americana: Blues & Roots Artist Nominee; Female Singer/Songwriter of the Year Winner; Best Female Singer/Songwriter in 25 Yrs Winner)

"Farnham adds some backbeat to a clever read of a standard on "My Funny Valentine" and her voice is rich and strongly confident."  --Jazz Weekly


"The moment I heard the voice of Katherine, strong, pure, sultry, soulful she is a delight to listen to - time and again." --The Jazzman, Jazzology Radio, Keith G., Atlanta

"This album has attitude like you wouldn't believe. Mind you, I mean positive attitude. It moves you, grooves you, entices you, and convinces you that this is one artist who solidly and easily distinguishes herself from the run-of-the-mill vocalists and musicians...Farnham takes us on a dazzling and delightful musical journey to a land of cool, sexy and suave. I fell immediately in love with the material from the very moment my ears and soul took notice." --The Smooth Jazz Ride

"Almost like she's plugging into Miles 1970s vibe...she takes you on the wild ride...Kool Kat is making records for tomorrow and has her finger on a pulse that's just starting to beat. Certainly the new street sound for nu cool cats." --Midwest Record

"She truly has a 'smash' on her hands. Katherine exudes an authentic musical heart, with a style all her own.  Her rendition of “People” is told directly from her soul, you can really sense that the lyrics mean something to her heart for the growth of people all over the world. She is a favorite in our jazz community..." --Jaijai J., The Jazz Network Worldwide

"Katherine is a rising vocalist and songwriter... Highlights include..."Necessary Groove". "My Funny Valentine"...will introduce the genre to a much larger audience." --O's Place Jazz Newsletter

"Pianist and vocalist Katherine Farnham breaks out the cool, the groove, the funky and the ethereal with Vintage. Solo piano introduces “Mermaid” with a few bars that flow like ocean waves. [Nestor} Torres’ flute is the perfect complement to Farnham’s haunting melody. After a brief solo by Torres, the two voices merge for some of the most beautiful sounds on the album." --The Jazz Writer

"It's a case of Diana Krall meets Christina Aguilera...A well balanced album that captivates and delights all the way. If you're after an experience that will recolour jazz but do it no disrespect, I feel confident you're going to go nuts over Katherine Farnham's latest offering "Vintage."  --Powermouth, Australia

"brilliant - everyone who hears this wants to know who it is" --5-Star Amazon Review, UK

"A fusion of Holiday, Vaughan and Dion, the Kat delivers a Kool stream of magical vocals." --T. Capone, Canada, Fan

For international band and solo photo albums, go to www.KatherineFarnham.com/Tour

For more press quotes in English, Spanish and Portuguese, go to www.KatherineFarnham.com/Press

For complete discography, go to www.KatherineFarnham.com/Discography